Gordon Korman, although not that much older than me, was a childhood hero of mine. Growing up in Canada I was one of many teens who loved and laughed all through the antics of Bruno and Boots in THIS CAN’T BE HAPPENING AT MACDONALD HALL (which we all knew Korman had written when he was in 7th grade) and its sequels, as well as my other favorites the Bugs Potter books. It was a huge honor as well as pleasure to review Korman’s latest novel in a prolific career, more serious than these earlier works and yet still with his signature humor as well as deft plotting and nuanced characters. Here is my review of LINKED for the Sydney Taylor Shmooze: 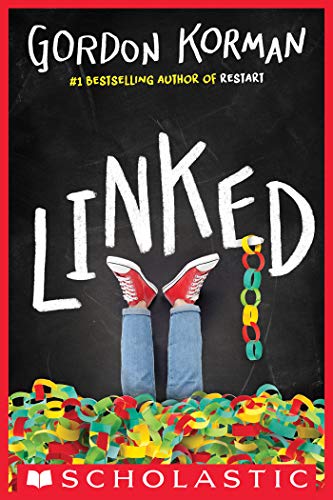 When a large swastika spray-painted in red is found in the middle school of a small quiet town in Colorado at the opening of Gordon Korman’s new book LINKED, everyone is shocked. Who would do such a thing? And why? The school takes swift and immediate action, organizing a comprehensive tolerance program that spans weeks. But this is when things get interesting from a narrative structure, because rather than the tolerance training being the solution, neatly tying things up … more swastikas begin appearing. Law enforcement, residents of the town and the principal of the middle school are flummoxed: now what? The kids feel helpless and enraged. Inspired by the famous 1998 Paper Clips Project by eighth graders from Whitwell Middle School in Tennessee, the students at Korman’s Chokecherry Middle School respond by coming up with their own plan to try to understand the enormity of the Holocaust, fight against hate and racism, and bring people together: they attempt to create a paper chain with six million links. The project takes off beyond their wildest dreams, even as swastikas continue to appear. The story is told from alternating points of view: Michael, who found the first swastika, is head of the art club and the only Dominican kid in the school; Dana, whose outsider status as one of the kids of the archaeologists from MIT working on a dig outside the town is even more cemented as the only Jewish person most of the kids in school have ever met; and Link—star athlete, the glue in the massive paper chain project the kids devise, and going on his own personal journey. The different voices give the story even more meaning as the reader explores along with them, hate and tolerance and why people do the things they do.

LINKED should be a strong contender for Sydney Taylor Book Award recognition. As a contemporary realistic middle grade novel, it addresses modern hate and racism, the Holocaust, a boy discovering his secret heritage and studying for his bar mitzvah, and that Judaism is not a monolith. Everyone looks to Dana and her family as the only Jews in town, but this makes her even more uncomfortable—and not just because it makes her further stand out. Yes, she had a bat mitzvah and helps Link study for his, but her family is fairly unaffiliated—they don’t keep kosher or mind living somewhere hundreds of miles from the nearest synagogue— and she doesn’t like feeling like the sole representative of Judaism. Not to mention that she’s many-generations American; the Holocaust turns out to be closer to Link than to her. LINKED is woven with Gordon Kormon’s signature humor, smart set-up and repercussions, as well as three-dimensional characters who don’t feel like stand-ins for tropes or plot-driven stereotypes. There’s a a mystery that keeps the pages turning quickly, a media personality manipulating the situation to his own benefit, and a community that comes together but also must face up to its own history.