Meira Drazin was in the lowest reading group in first grade, although once she finally learned to read she never stopped and will read almost anything (unless it’s way too scary) in almost any genre. Originally from Toronto, Canada, she lived in New York City for many years, and now lives in London, England with her husband and four children. She studied literature at Barnard College and has an MA in English and Comparative Literature from Columbia University. Meira Drazin’s debut novel, HONEY AND ME, published by Scholastic Press, was the winner of the Sydney Taylor Manuscript Award and was a Kirkus Best Middle-Grade Books and Best Middle-Grade Friendship Stories of 2022 selections. Pitched as a ‘Jewish Penderwicks’ or All-of-a-Kind Family meets Judy Blume, the novel follows an 11-year-old girl as she navigates sixth grade in the shadow of her fearless best friend. Meira Drazin likes to write books that she would have liked to read when she was a child. 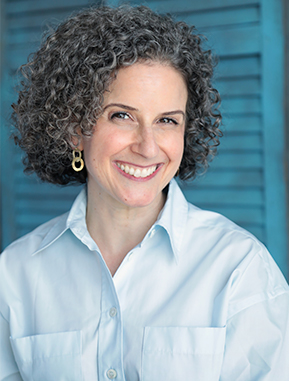 Is this stunning watercolor illustration on my homepage and as a theme throughout this website me? YES, and… no.

I had seen the fabulous work of artist Rose Metting on Instagram and when I saw that she did commissions of people’s children and pets I approached her with the idea of creating something for my author website. I sent her pictures of myself and of my favorite spots in my home where I love to read, write and dream. We discussed books that I loved when I was growing up and some of my current favorites—see if you can spot them. I sent her pictures of my family (see if you can spot them!) and talked about how I love to knit, crochet and needlepoint. What she came up with was a fictional space that doesn’t look like any specific room in my house or exactly like me, but that perfectly captures who I am. And of course she made it raining outside, because I live in London, where it rains a lot! 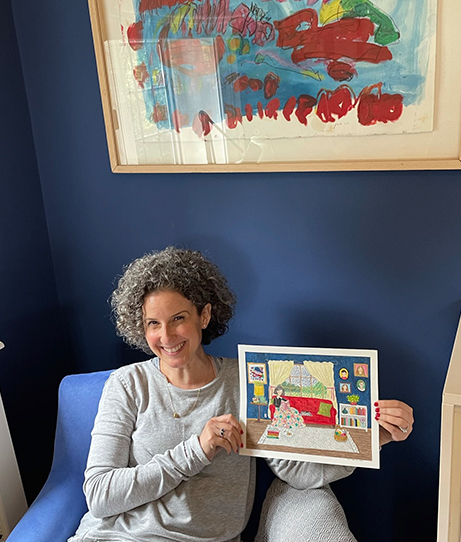